As the taxi drove me and two new friends from the airport to campus on my first evening in Hong Kong, I was amazed by what I saw out the window – a forest of glittering towers on all sides, packed close to the highway that they whizzed by too quickly to capture a picture. The vast majority of these buildings, however, are not beautiful skyscrapers crafted by renowned architects and housing the offices of major international corporations. Certainly, Hong Kong possesses a very impressive skyline full of such buildings, but the buildings that fill in all of the gaps, spreading up the hills, and giving the city its “urban jungle” feel are the packed apartments that are home to Hong Kong residents. 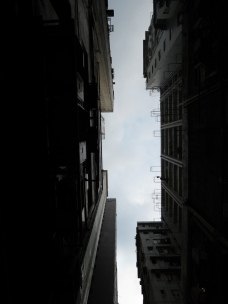 Looking up between two apartments 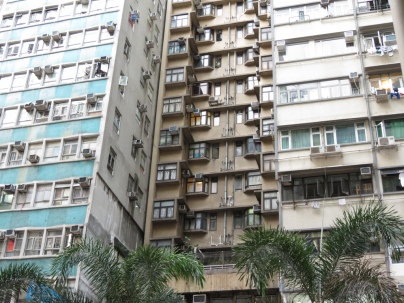 With no room to spare, apartments are built literally side by side

Even out in the New Territories near the Chinese Universtiy of Hong Kong, clusters of apartments of 30 or 40 floors are squeezed close together in every valley. As one of the “most densely populated areas in the world,” it is only feasible to build up and not out. The spacing between the apartments was probably even more surprising to me than the overwhelming number of them, adding to their impressiveness. Some buildings on Hong Kong Island are simply exactly next to each other. Many others appear to close together that a resident of one could probably stretch their arm out the window and easily high five their neighbor in the next building over.

Another feature of the apartments is how, at first glance, they all appear to be quite dirty and run down. Yet as I have wandered the streets of Central, Kowloon, and Wan Chai over the past month, I didn’t see many that did not have this appearance. “Surely there must be luxury apartments somewhere in this major world financial center.” Of course some looked much shabbier than
others, I still wondered why none seemed to fit my idea of what a luxury apartment would look like from the outside. (Disclaimer: I did not grow up or attend school in a major city, so my ideas could be unrealistic even in the US).

All of these observations and a growing suspicion that apparently unkept outsides hid much nicer insides fed a growing curiosity to see the inside of one of these apartments. Walking on the streets, the most I ever saw was dimly lit stairwells with metal gates that led up into the housing units above the shops below. Luckily, a very loose family connection put me in contact with a local man who had a high school aged daughter whom he was eager to introduce to a Western college student. Though I had never met the man, his wife, or his daughter, they picked me up and treated me to a trip to a museum, a short hike, and then lunch at a restaurant.  Throughout the day, we exchanged questions and answers about various topics, and by the time they dropped me off again, they had kindly extended an invitation for me to join them for dinner that evening…in their apartment!

A view from CUHK – another cluster of apartments

As I had guessed (and my mainland Chinese roommate suggested when we talked about the topic previously), local Hong Kong families do not typically have guests over for meals in their homes due to their size. Sure enough, I arrived to their 20th floor apartment, the main room which contained the entry way, shelves, a TV, small couch, and fold-out dinner table was not more than 20 square feet. Leading off from this room was a kitchen perhaps 4 feet wide and 10 feet deep and a short hallway leading to a small bathroom, two bedrooms, and an office. Each of these rooms was smaller than the main room; the office perhaps the size of my own walk-in closet at home.

Apart from the size, the apartment was as clean and well-kept as any normal household. The slightly run down appearance of the building’s exterior was not reflected on the inside. Wood floors and clean, white walls with modest furniture with little extra decoration made it feel like (what I would consider) a normal middle class home.

Overall, I’m sure that different apartments have vastly different interiors, ranging in size and condition. What is clear, however, is that there are no neighborhoods or houses as Americans conceive of them. Property and housing are far too scare and far too expensive for such development patterns to exist. Instead, everyone, from opulently rich to the working poor, live in these massive jungles of apartments.