Last weekend, another American exchange student I’d met in one of my classes and I boarded a plane in Hong Kong International Airport and headed to Bangkok, Thailand for the weekend. To give some background, only about four days earlier we had booked the tickets. Only one day earlier we’d booked a room in a hostel we found online. The night before leaving I’d quickly researched an itinerary and directions to different places we might want to see while there. Our original (and still only week-and-a-half old) plans to go to Seoul using a Groupon deal had fallen through, but we were determined to go somewhere. Since the cheapest flights were to Bangkok, Thailand it was. 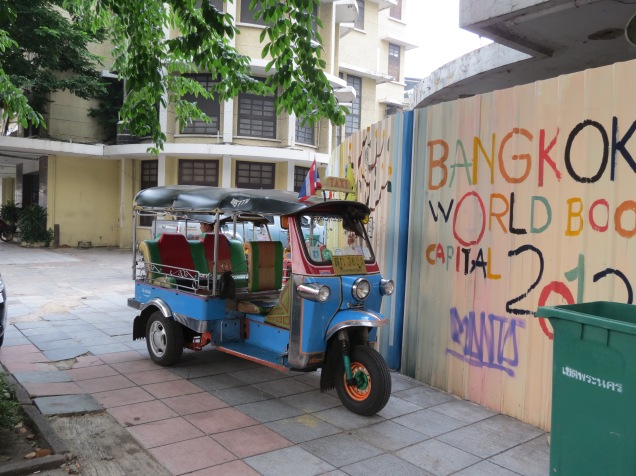 Arriving early Friday morning, the lack of planning on my part already showed through as I realized I hadn’t withdrawn enough cash or called my bank to let them know I might be using my card in Bangkok or put extra money on my pay-as-you-go SIM card to cover international data charges or brought a converter to work in the different plugs so I could even charge my phone. Luckily, we were able to fix or work around most of these issues, and by 1 PM Sari and I had checked into our hostel (which turned out to be quite clean and comfortable) and set out to explore the city.

We started with perhaps the most common type of attraction in Bangkok:  “wats.”  These typically Buddhist sacred spaces seem to be everywhere you turn, their golden spires beautiful orange roofs rising over the low, dirty city buildings. 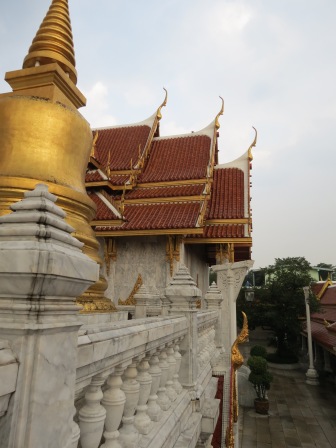 A wat we stumbled upon

Beautiful details on the roof of a local wat 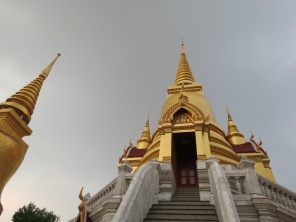 Another view of one of the wat’s spires 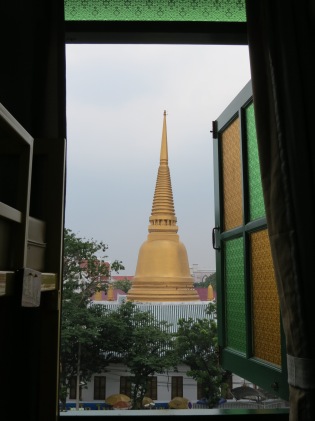 The view from our hostel

Inside the temples, one of which we had the privilege of entering and sitting in completely alone, sit golden buddhas with food and incense set out before them, glittering accessories, and mesmerizingly intricate art depicting what I assumed to be scenes and figures of great religious significance.  One we visited is known for its towering standing buddha, another we weren’t able to see for its huge “reclining buddha.”

Exhausted from a long day of travel and needing sleep before an early morning, we headed to bed anticipating a trip to the famous floating markets, a visit to the bridge made famous by the book The Bridge Over the River Kwai, and the “Tiger Temple,” an attraction we knew little about.

The day trip began by boarding a somewhat sketchy, large van (granted with many other tourists) and driving for hours out through the Thai countryside. Upon arriving at the market, the group was left to explore. On the banks of a canal, on which many Thai live, there were seemingly endless shops selling food, clothes, and all manner of trinkets and souvenirs. The real action, however, was on the water. Paying only 40 Baht (about $1.29 USD for comparison) to be paddled around the canal by a Thai woman in a long boat, we spent the next hour haggling with the shop keepers in their own boats packed with jade elephant carvings, silk scarves, and fresh cooked Thai food and soaking in the sights. Despite how tourist-y the area was, it was undoubtedly one of the day’s highlights, tied only with the trip through the local canals that followed our time in the floating market en route to the bridge and tiger temple. 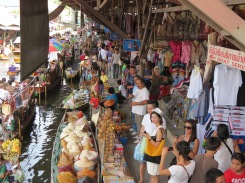 The floating market crowded with eager vendors and gaping tourists

Floating market from the banks

A floating market vendor in her boat 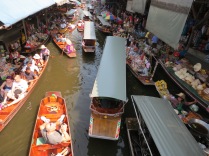 The floating market from above 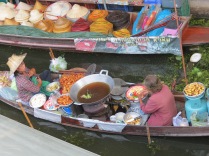 Now on a speed boat, we whipped through “side alleys” and quiet, country neighborhoods away from the floating market. This more genuine glimpse into the traditional Thai lifestyle was incredible. Houses lined the canals, built on wooden stilts to stay above the water. Often we passed the entryways to other canals, leading off into the distance. Glancing down them as we streamed by, front porches and laundry hung out to dry gave a more intimate picture of the local lifestyle. Combined with the natural environment, which I would describe as essentially jungle, the effect was somewhat surreal.

The bridge and tiger temple were not quite as exciting. Although we were able to take pictures with live tigers, the tiger “temple” was much more of a tiger trap. Clearly built only to lure tourists, the tigers wore collars with short chains connected to the ground. The facility seemed run down, and the tigers were probably not treated how they should be. In retrospect, I regret paying the money I did both because the experience was not worth the price and because I wish I had not supported the operation. The bridge, while more interesting, was still just a bridge. The events of the book that made it famous actually describe a bridge that did not really exist, though it is based on historical fact.

The bridge that spans the Kwae Yai River

On the bridge that spans the Kwae Yai River

Making friends with a tiger

Still, overall, the second day was a success. With only one day left, Sari and I made plans for a self-guided tour of the old capital of Siam, Ayutthaya.